Chimes from a Cracked Southern Belle 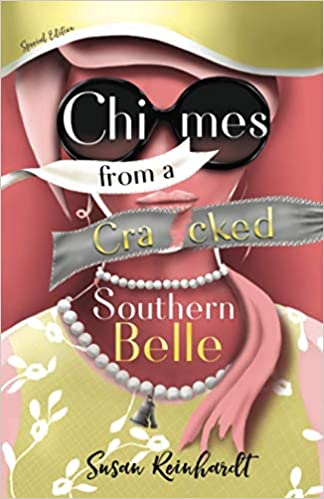 There are a number of laugh-out-loud scenes, from the 104-year-old woman who won’t let her driver’s license expire without a fight, to the crazy aunt who crashes funerals of strangers just to get a good spread of Southern cooking. This ultimately is a tale of forgiveness and survival in the Deep South. Highly recommended!
Most people think the reason Prudy “Dee” Millings married the best-looking man in the Carolinas who turned out to be a complete psycho and near-murderer is because she was raised all wrong.
That’s nothing but horse manure.
In this
Amazon Bestseller and University of Georgia Book Club pic,
Dee is a plucky heroine to root for as she sets out on a path winding with loveable kooks, the kind we all know and love in great southern fiction.
With her ex behind bars mailing threatening letters, Dee’s adventure begins when she and her two young kids settle in her old hometown, Spartanburg, South Carolina.
There, her over-the-top mama is determined to exert her opinions and Proverbs, most of which center around Dee’s choices in everything from chastity to men to apartment decor.
Dee finds new purpose for herself and her children, discovering joy in places she never expected it: in a nursing home where she tends to the likes of 104-year-old Annie Sue who still drives and has a hankering for cold draft beer.
As Dee begins a journey toward recovery and becoming a registered nurse, an old flame appears, a dark secret resurfaces, and if handled right, could be her ticket to allowing herself to love again.